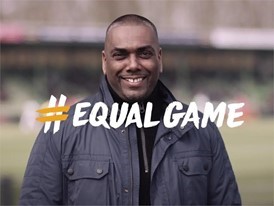 “I have learned that my biggest weapon is my tongue – daring to talk about the things I think about, about what is going on, how I feel,” says Jules Rasoelbaks, former prisoner and now coordinator at De Hoop, a rehabilitation centre based in Dordrecht in the Netherlands that helps people with a drug addiction or mental health issue reintegrate into society. He is selected for UEFA’s #EqualGame campaign were they focus on people who are examples of how football promotes inclusion, accessibility and diversity.

Rasoelbaks has first-hand experience of the difficulties faced in trying to make a new start. He was sent to prison on seven occasions, and was a drug addict for 22 years. He has now been clean for almost a decade, and his role at De Hoop has three main functions: “as bridge builder, ally and representative”. “It is also about showing your vulnerabilities, even as a role model”, he adds.

He is selected for UEFA’s #EqualGame campaign were they focus on people who are examples of how football promotes inclusion, accessibility and diversity; his or her story exemplifies how disability, religion, sexuality, ethnicity and social background are no barriers to playing or enjoying football.

Together with the football club FC Dordrecht he helps former prisoners gain work experience in maintenance or as hosts and matchday stewards – acknowledging that this is “very important to them as they have to rebuild their lives”. The ultimate goal is to advance their prospects of a paid job.