You will recall that when adopting the revised United Nations Standard Minimum Rules for the Treatment of Prisoners (the Nelson Mandela Rules), the General Assembly decided to expand the scope of Nelson Mandela International Day (18 July) to be equally used to promote humane prison conditions, to raise awareness about prisoners being a continuous part of society and to value the work of prison staff as a social service of particular importance. At the occasion of this year’s Mandela Day in 2021, UNODC is therefore preparing for a virtual awareness-raising campaign entitled #Act4MandelaRules, the details of which are described in the flyer below.

It will be an open, de-centralized campaign that will encourage users to upload 40-second videos on social media, in particular Twitter, between 14 and 21 July, in which they briefly highlight initiatives they pursue to improve prison management and the treatment of prisoners in their country/region; elaborate on what remains to be done to improve the situation of prisoners and those working in prisons, including in times of COVID-19; or provide arguments why the general public should care about the plight of prisoners. What UNODC would like to showcase and acknowledge through the campaign is the many individuals from across the world who are working hard to turn the Mandela Rules into reality.

To become part of the Nelson Mandela Rules campaign, post a video on social media before 21 July 2021 and brand it with the following tags:

For further instructions about how to post the video, please refer to this flyer: 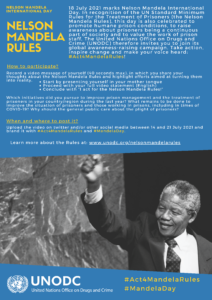