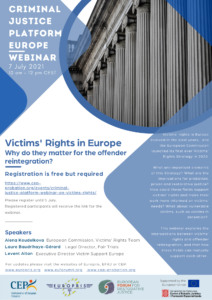 (Click on the flyer to view it in full size)

Victims’ rights in Europe evolved in the past years, and the European Commission launched its first-ever Victims’ Rights Strategy in 2020.

What are the important elements of this Strategy? What are the implications for probation, prison, and restorative justice? How could these fields support victims’ rights and make their work more informed on victims’ needs? What about vulnerable victims, such as victims in detention?

This webinar explores the intersections between victims’ rights and offender reintegration, and that how these fields can mutually support each other.

Laure is Legal Director (Europe) at Fair Trials, an international human rights NGO that campaigns for fair and equal criminal justice systems. Laure is based in Brussels and leads Fair Trials’ work in Europe. Prior to joining Fair Trials in 2018, Laure qualified as a lawyer in England and Wales and has over ten years of legal practice representing and advising clients on government investigations and in EU law-related disputes. Laure holds qualifying law degrees from universities in the UK, France and Belgium, and Masters degrees in European law (College of Europe, Bruges) and criminology (Universite Libre de Bruxelles). Laure has published in the field of criminology and actively participates in prison monitoring activities in Belgium.

Levent Altan has been Executive Director for VSE since 2014. In that role he is responsible for providing overall leadership, strategic direction and management of the organisation. Levent began his career in 2001 in the UK Ministry of Justice before moving to the Home Office and the Cabinet Office under Prime Ministers Blair and Brown. Having previously worked in the European Commission for three years, Levent returned in 2009, to work as a national expert tasked with writing an EU Directive on victims’ rights. Over the next three years, he developed the European Union’s policy on victims’ rights, leading the development and negotiation of the EU Directive which establishes minimum rights for victims of crime in 26 Countries across the European Union. Subsequently, Levent worked as Principal Legal Advisor at Milieu Ltd, a multi-disciplinary consultancy, where he led a team running various multi-country projects on justice and home affairs. Levent has worked and spoken extensively on victims’ rights across Europe and globally, providing expertise to national governments as well as the UN, Council of Europe and European Union. He helped found VSE’s sister organisation Victim Support Asia, and most recently is leading the consortium delivering the work of the European Commission’s EU Centre of Expertise for Victims of Terrorism.

Abstract:Deprivation of liberty is amongst the harshest of measures that states can take against individuals and should only be used as a last resort. Detention is used in both a criminal proceedings context, and also in many countries in respect of undocumented migrants. The impact of detention can be devastating in itself, meaning losing access to family and friends, or your job. But in addition to all of this, detention exposes a person to a heightened risk of violent crime: according to the World Health Organisation,  25% of prisoners are victimized by violence each year. Putting a person in detention not only places them in a violent setting, it also makes them vulnerable. Imagine being detained: you are isolated, stigmatized, without access to information and often without means of communication with the outside world.Detention itself is also not transparent: it occurs behind closed doors, and there is a lack of accountability and oversight. Places of detention can and often do operate as a kind of legal black hole. Due to the vulnerability of detainees and the high risk of violence in detention, when states detain people, they have a legal and moral responsibility to ensure their safety.

This is why the EU Commission, in its Strategy on victims’ rights (2020-2025), recognised that detainees are among the most vulnerable groups that require particular attention and scrutiny from Member States. It stresses that more needs to be done, at the EU and national level, to ensure detainees’ effective access to justice. Tools must be designed to allow detainees to report crime, and coordination between all actors that come into contact with victims, including the police and detention staff, must be enhanced. In 2019, Fair Trials published a report based on research it conducted with five partners to examine the barriers to access to justice for detained people who suffer physical violence, whether by detention staff or co-detainees, in six EU Member States (Belgium, Croatia, Hungary, Italy, the Netherlands, and Sweden). We focused on immigration detention and pre-trial detention in the context of criminal proceedings. We will present our findings and recommendations.

Abstract: The presentation will provide an overview of the basic needs and rights of victims, the impact of trauma and core responses to victimisation and recovery to explore how this knowledge can support services working with offenders as well as offenders themselves during incarceration and release. 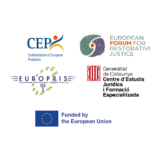 REstART Festival on the art of justice, solidarity and repair (2020)
Read more 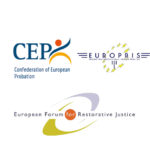 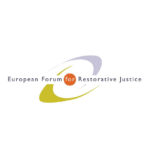